Tiv and Jukun Women: Veritable Instruments in the Search for Peaceful Coexistence

Talk by Most Rev. Ignatius a. Kaigama, Archbishop of Abuja, during the women peace-building conference under the auspices of the Foundation for Peace, Hope and Conflict Management (FPHCM), 4th – 8th August 2020, at Global Suite Hotel, One Man Village, Karu lga, Nasarawa State

Please, permit me to welcome you to this forum and to acknowledge with gratitude this very laudable initiative of the Foundation for Peace, Hope and Conflict Management (FPHCM). I extend my gratitude to the Executive Director, Rev. Fr. Prof. Anthony I. Bature, for his kind invitation and for his audacity of hope to embark on this project. This assembly is a significant message and a clarion call by women of Jukun and Tiv extraction to unity, harmony and peaceful coexistence. We know that unless the Lord builds the house in vain does the labourer labour. May the Lord bless this initiative and let it bear fruits, fruits that will last.

I recall our historic gathering on 16th January, 2019, in the presence of the Governors of Benue State, Governor Samuel Ortom, and the Governor of Taraba State, Arc. Darius Dickson Ishaku, and Royal Fathers of Jukun and Tiv land, at the Federal University, Wukari, to reflect on Tiv-Jukun relationship during which a book was presented by Mr. Joseph Bem Targema, titled, Tiv-Jukun Relationship: The Model of a Jukun Bishop and a Tiv Priest. The book describes how the friendship between Rev. Fr. James Bature, a Tiv priest, and Archbishop Ignatius Kaigama of Jukun extraction, has lasted for over forty years and could be a good and practical testimony that friendship between these two ethnic groups is not only possible but also very desirable.

This gathering of Tiv and Jukun women in Abuja today is therefore a very positive step and a wonderful boost to peaceful coexistence among the two ethnic groups. Women are veritable peace instruments. You women stand a better chance and have the moral and emotional advantage of talking to your husbands, children and relations. Dear Tiv and Jukun women, please tell your children, husbands or relations to drop the arms; they should avoid prejudices and stigmatization, and learn to forgive and see in one another the image and likeness of God. The negative social consequences of the conflicts inflicted on one another have not and will never be helpful to anyone.

Many efforts at peaceful resolution have been made so far but the tensed Jukun-Tiv relationship seems like a stubborn boil that refuses to go away. Destruction and killings seem to have become a constant! Suspicion, distrust and hatred are so strong that some Jukun and Tiv persons are allergic to the name of the other.

What is the cause of this mutual antagonism and hostility? This remains a mystery despite the many meetings, panels of enquiries and reconciliation committees set up in the past. For many, land matters seem to be at the centre of it; others believe that politics is the cause. During a visit to me by the Tiv of Taraba State resident in Abuja on July 9, 2020, they identified politics as the only cause. I however suggested to them that we need perhaps to examine historical factors such as colonialism, the reality of the Kwararafa Kingdom and the sensitivity of ethnic identity. It is a tragedy that Jukun and Tiv people keep going in parallel lines, each claiming to be right and to be the victims each time a crisis occurs.

This sort of troubled relationship was what informed a consultative meeting of some of us Bishops and priests among whom were Tiv and Jukun Bishops and priests, from Jalingo, Wukari, Katsina-Ala, Makurdi etc. The meeting was facilitated by Bishop Matthew Hassan Kukah at the Dialogue, Reconciliation and Peace (DREP) Centre in Jos, on the 8th of October, 2019. There was a very passionate appeal that members of the two ethnic groups should sincerely understand and embrace one another. The disturbing trend of violence leading to deaths, destruction of houses and means of livelihood involving the Jukun and Tiv ethnic groups in parts of Taraba State and the border settlements of Benue State, becoming endless, was the subject of discussion.

The Tiv and Jukun should be the best of neighbours, but these crises prevent them from cherishing their beautiful cultural heritage and the gifts of nature abundantly endowed to them in the areas they inhabit. This tensed relationship has always led to the needless taking of lives which violates our Christian conviction that life is sacred and life is worth living.

During the meeting referred to above, we reminded ourselves as priests to remain neutral, non partisan and not to act as ethnic champions, but rather offering prayers, promoting reconciliation and witnessing on how to forgive. We encouraged ourselves that priests, pastors and other church leaders should avoid getting sentimentally involved, taking sides or even whipping up sentiments.

We should use the advantage of our privileged theological studies to stand apart or distance ourselves from parochially divisive narratives that further strain relationships. Care must be taken not to be influenced by unsubstantiated narratives that ethnic chauvinists thrive on. The priest is a mediator between his people and God. He judges, reconciles and teaches. We must resist the infectious Nigerian disease to reduce everything to ethnic interests rather than the common good. Philippians 2:4 appeals that we see the good in others and put their interest first while Isaiah 2:4 urges believers to beat their spears into plowshares.

We also urged for more moderate and reconciliatory utterances or statements from political leaders, traditional leaders, religious leaders and elders who should speak the language of peace instead of war. This is even more so because most of our people are Christians and so the embarrassing conflicts with attendant mutual atrocities go contrary to our cherished traditional and Christian values. We noted that there are unhealthy propaganda, deep seated historical prejudices which result in name-calling, stereotyping, and degrading statements about one another. The misuse of the social media, the distorted and exaggerated write-ups or media commentaries in no small way perpetuate the crises.

Prior to our meeting in Jos, worried by the renewed hostility between the Jukun and Tiv, I spoke on phone separately to both HRH Prof. James Ayatse, the Tor Tiv IV, and HRM, Dr. Angyu Masa-Ibi (Kuvyon II) the Aku Uka of Wukari, on the 16th of June 2019, and followed it up with a text message to both of them, part of which reads:

“….Our people, the Jukun and Tiv are facing collective threats from all angles and this is the time for us to transcend prejudices, stereotyping, artificial barriers, discrimination, mutual violence etc to face our future both in terms of social welfare and security. We keep praying to God Almighty for His intervention. I will continue to seek the support of my brother Bishops so that we sustain the moral and spiritual counsel among our people for reason to prevail so that we can enjoy uninterrupted peace. The narrative of violence each side is giving further increases tension. When speaking to Jukun people, they say that some of their towns have been sacked by the Tiv and many people killed and when speaking to Tiv persons they tell stories of atrocities committed by the Jukun people against the Tiv. One is not sure about what is fact or rumour. Effort must be made to limit or correct the stories that circulate which could further escalate the tension and violence. Blessings upon our people. May the Lord bring us His peace and harmony. Archbishop Kaigama.”

At this point I wish to call on the Federal and State Governments to seriously check the recurring crises which instead of promoting positive viable agricultural activities in the area to attract investors, plunge the populations into greater and greater poverty. Youths seem to look forward to the next crisis, having no employment options.

Land disputes are a common feature among neighboring ethnic groups. Arguments over boundary issues often result in serious breach of peace. These refuse to go away perhaps because of what may have become an unofficial policy in Nigeria that States or Local Governments are associated with particular ethnic groups, instead of emphasizing the citizenship of all irrespective of ethnic identity. President Obama would never have been President if the narrow matter of “state of origin” or “tribe” were the norms in the United States. A Nigerian should be able to live and work in any part of the country without the limitations of place of birth or maternal language.

There are many Tiv and Jukun people who have lived well as neighbours, intermarried for decades and still live happily. Friendships have been cultivated that have stood the test of time. Rev. Fr. James Bature, a Tiv man, whom I call “Aboki,” and I, of Jukun extraction have over the years regularly celebrated our friendship (abokiship) to thank God for making the paths of a Tiv man and a Jukun man cross. Such celebrations were held in Ugba, Gboko, Taraku (Benue State), Kona (Taraba State) and Jos (Plateau State).

Mr. Joseph Bem Targema kindly documented the circumstances, history and present status of our friendship since Fr. Bature and I first met in St Augustine’s Major Seminary Jos, Plateau State, in 1978, over a cup of tea, while studying for the Catholic priesthood. The author noted the lessons that could be learnt from our story, hoping to inspire many youths and adults of Tiv and Jukun origin to cultivate a friendship that transcends ethnic prejudices and paves way for positive interpersonal relationship instead of the blame game or finger pointing that has characterized the relationship between the Tiv and Jukun over the years.

While some skeptics would think that a friendship like that of Fr. Bature and I would be near impossible and not to talk of it flourishing and improving by the day, the reality is that there has been by the special grace of God a sincere, honorable and edifying friendship spanning forty years and still counting. It is our conviction that it is such friendships that can break down the walls of division and neutralize the poison of hatred, division and violence. I have visited Fr. James Bature (Aboki) in all the parishes he served and he would always introduce me to his family and those dear to him. He too has been to my village Kona, in Taraba State many times, celebrated Masses in Kona Parish Church and joined me at significant events.

Before I conclude, may I request that we pray for those who have died during these conflicts. Please stand for a moment in honour of the dead. May their souls rest in perfect peace. Amen. Let us intensify our prayers for the injured, displaced and for permanent peace. Kindly exchange telephone numbers before the end of this event and keep in touch with one another.

I pray that this meeting of you the representatives of the Taraba and Benue States women will be a great inspiration for a greater interpersonal relationship among the Tiv and Jukun people and hopefully, the youths, the men and the elders will have something to learn. I believe we can draw the lesson that prejudice, superiority complex, distrust, blame game and violence can give way to genuine friendship and peaceful coexistence, if there is the will.

Thank you for your kind attention. 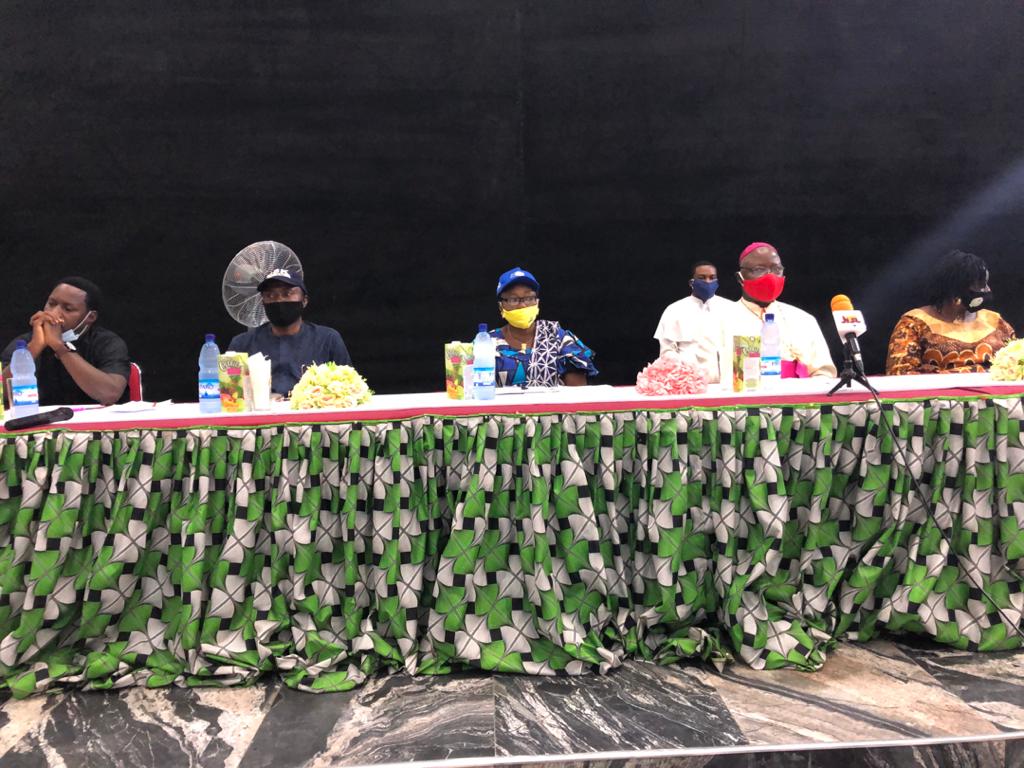 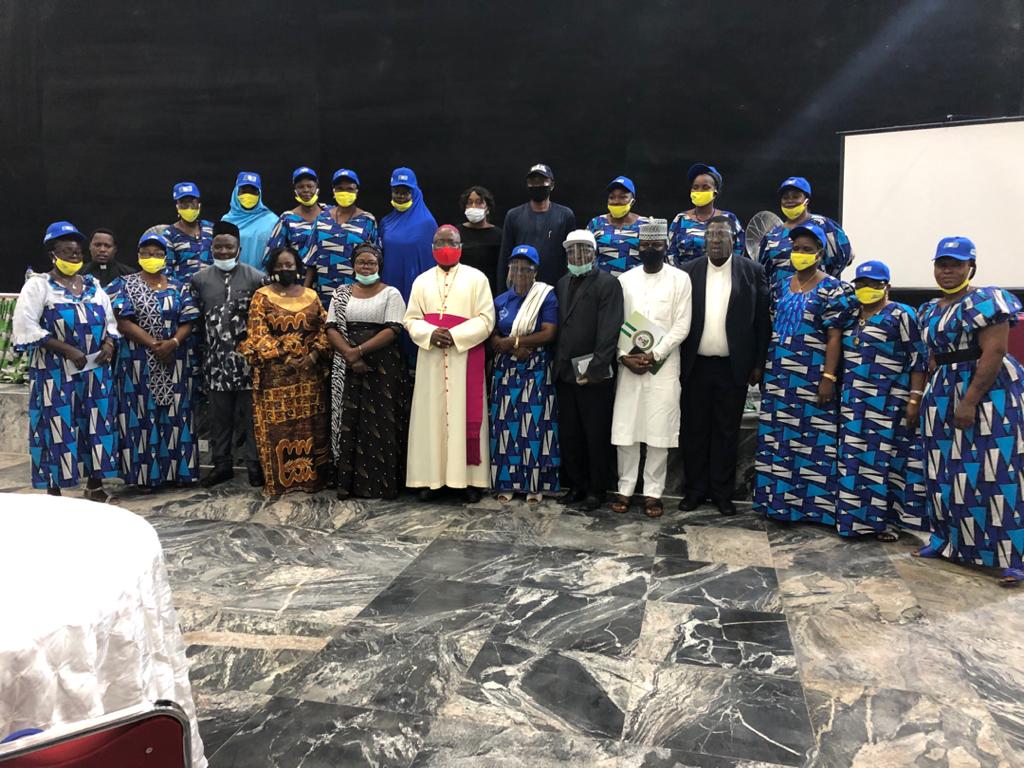 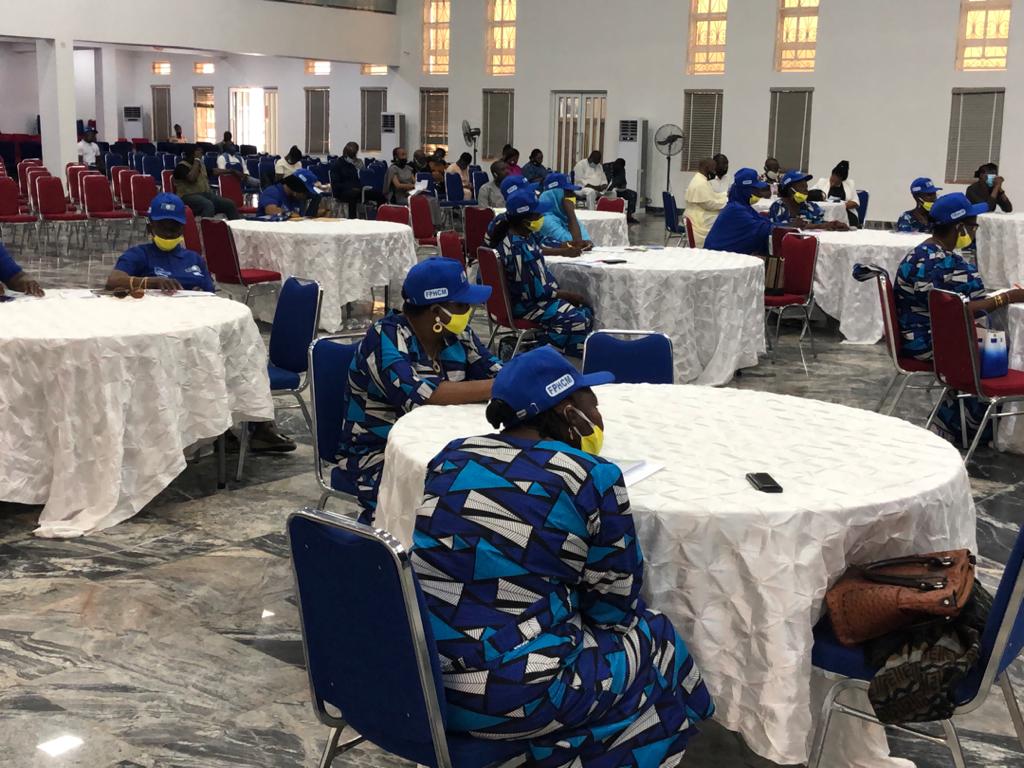