The Holy Father, Pope Francis on 11 March, 2019, appointed me, Most Rev. Ignatius Ayau Kaigama, as the Coadjutor Archbishop of Abuja Archdiocese. At the same time the Holy Father has appointed me the Apostolic Administrator of the Archdiocese of Jos. By virtue of this, I will continue my duties of tending the Lord’s flock in the Archdiocese of Jos, meeting all my appointments and schedules earlier made and fulfilling all my normal pastoral duties. I remain Apostolic Administrator, pending the time a new Archbishop of Jos is appointed and duly canonically installed.

A Coadjutor Archbishop is appointed by the Holy Father with a right of succession when the tenure of an incumbent Archbishop ends. The presence of a Coadjutor therefore ensures that there is no period during which an Episcopal See is vacant since under this arrangement the transfer of authority from a predecessor and a successor (Coadjutor) is as seamless as possible (cf. Canon 409 ♯1)

When there are pastoral demands and when a Diocese requires it, an Auxiliary Bishop is appointed by the Holy Father. He helps and collaborates with the Diocesan Bishop in running the Diocese. He however, has no right of succession.

In a meeting with his Consultors on 16 March, 2019, when I formally presented myself according to the demands of Canon Law, the Cardinal expressed the hope that the transition period might not take too long.

QUESTIONS LIKELY TO BE ASKED

Who succeeds you as the Archbishop of Jos?

As usual, the Apostolic Nuncio in Nigeria as directed by the Holy Father initiates a thorough investigation and search for a suitable candidate through confidential enquiries. The results of the enquiry are forwarded to Rome and carefully studied by a committee of Cardinals and presented to the Holy Father who freely chooses one among the names presented.

When will the new Archbishop be appointed for Jos?

That entirely depends on the Holy Father. It can take months, a year or more.

When do you leave Jos for Abuja?

When my successor is installed. For now, things proceed as normal since as Apostolic Administrator, I perform all the duties that I was performing before as Archbishop of Jos Archdiocese. However, with my announcement as Coadjutor of Abuja Archdiocese my duties in Abuja have commenced. I have had meetings with the Cardinal, the Auxiliary Bishop and the consultors. I already have an accommodation prepared for me in Abuja and even though I am still looking after Jos Archdiocese, I will go as arranged with the Cardinal to spend time in Abuja to participate in designated assignments.

Which Archbishop’s name will be mentioned at Mass in Jos Archdiocese now?

Does becoming a Coadjutor Archbishop of Abuja to succeed Cardinal Onaiyekan make you a Cardinal?

No! The title of Cardinal is not inherited. It is the prerogative of the Holy Father to name Cardinals. I am being sent to Abuja Archdiocese as a collaborator and a humble servant of the people of God.

What becomes of the project of the Divine Mercy Cathedral in Jos?

We need to triple our efforts individually and collectively to bring the project to a greater level. I will spend my remaining time as Apostolic Administrator mobilizing, encouraging and helping my people of Jos Archdiocese to sustain the momentum of sacrifice and work. By the time I finally leave, a lot more progress will have been recorded. I trust my people in Jos Archdiocese. For the past five years they have made huge sacrifices for the new cathedral project. As there is still so much work to be done, further donations can be made through the following bank details:
– Account name: Divine Mercy Cathedral
– Account Number: 1013908758
– Bank Name: Zenith Bank.

What of the Cause for the Beatification of Archbishop G. G. Ganaka?

Work is progressing. Prayer cards are being distributed. The Beatification Committee will be meeting with me soon to discuss the progress of work and strategies to complete the Diocesan phase of investigation as soon as possible. A lot of funds are needed and the account details to send donations are:
Acc. Name: Beatification of Archbishop Ganaka
Acc. No. 0041198179
Bank: Access Bank PLC.

Never, ever did I think that it would please the Lord to put it in the heart of His Holiness, Pope Francis, to appoint me as the Coadjutor Archbishop of Abuja Archdiocese. It has however happened. In obedience and conscious of my lowliness, I accept this challenging call to service. My most sincere gratitude to His Holiness for trusting that I can attempt this task. By the grace of God I will give all I can within my limited capacity.

As His Holiness has also asked me to remain the Apostolic Administrator of Jos Archdiocese until a new Archbishop is appointed, I will continue to do my best in serving the lovely and supportive people I have served for almost nineteen years. I humbly ask all for fervent prayers for the success of my new assignment. I beg God for more graces, strength and direction. 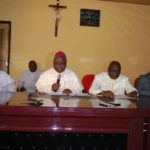 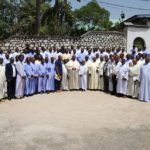 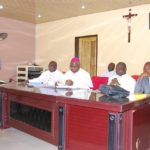 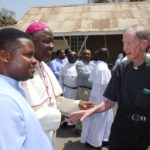