THANK YOU JESUS FOR GIVING US THESE PRIESTS TODAY

Just after the ordination of five priests last June, we are blessed today again with another four priests who in our judgement after about ten years of preparation, are set to go into the field to do what Jesus sent the seventy-two in Lk 10 to do on mission: to preach peace, to cure the sick and to proclaim The kingdom of God.
Faced by worrisome trends such as growing secularism, consumerism, materialism, relativism, careerism in our contemporary society, we are compelled to remind ourselves again and again what the Catholic priesthood is all about. I shall draw my reflections from Scripture, from St. Charles Borromeo, from Pope Francis and from my late father, Peter Noku Kaigama.

In the first reading (Numbers 11:17,24-25), we learn that Priests are elders who have a divine call to lead the people of God as in the case of the 70 elders whom God took some spirit that was on Moses and put on them and they prophesied.

The second reading (1 Peter 5:1-4) re-emphasizes that a priest is an elder; a witness of Christ and his sufferings; a shepherd of the flock; he watches over those God has entrusted to his care. He should have a generous heart; not looking for a reward; he should not lord it over others; he must be an example; respect authority; act with humility, serve others rather than expecting to be served.The Chief Shepherd will award him with the glory that will never fade away.

The gospel from John 6:35-38 is about the bread of life which satisfies hunger, quenches thirst and guarantees eternal salvation. The priest is therefore called to care for souls and the Eucharist is the medicine he dispenses to keep the soul strong and healthy.

However, the degree of poverty and unemployment owing to the harsh economic environment in most parts of Africa, seems to reduce the priests’ role to that of a social worker, a provider of education, health care, and the advocate for social justice and peace, to the extent that many mistake the intervention of the Church in political or social issues as the main task of the Church instead of the salvation of souls.

The priest has the very important task to bless and consecrate ordinary bread and wine which become the body and blood of Christ, food for souls, not merely to provide food for the stomachs. I believe that if the structures of government were working effectively at the national, State and local levels, and our people were being provided the necessary infrastructure, social amenities, adequate security to lives and property, exploit through aggressive mechanized farming the vast agricultural potentials to provide food, employment, etc., priests shall only be concerned with “ prayer and preaching of the Word (cf. Acts : 6 : 4) and not mainly looking after the social needs of the people.

At my interactive session with the four priests-to-be, I asked them what answer they gave during their interview for admission to study for the priesthood when asked about their motive to become priests. In different ways they all said they were called to serve God, to serve the people and to gain eternal salvation.

If that is your mission and ambition, the sermon of St. Charles Borromeo on priests is appropriate for you: “Practise what you preach”. This 2nd reading of Divine Office on the feast of St. Charles Borromeo, 4th of November, is a very helpful reading and should be read again and again by we priests. St. Charles Borromeo admits that we are all weak, but he insists that a priest must lead a good and holy life. He must be chaste and reflect heavenly virtues in the way he lives. He should resolve to use suitable means, such as penance, prayer, the avoidance of evil discussions and harmful and dangerous friendships. He should pray the office and celebrate Mass constantly and faithfully. He should be recollected at prayer and avoid distractions as well as he can. “Stay quiet with God. Do not spend your time in useless chatter.”

“Preach by the way you live. If you do not, people will notice that you say one thing, but live otherwise, and your words will bring only cynical laughter and a derisive shake of the head.”
“Are you in charge of a parish? St. Charles Borromeo asks. “Do not neglect the parish of your own soul, do not give yourself to others so completely that you have nothing left for yourself. You have to be mindful of your people without becoming forgetful of yourself.”

St. Charles Borromeo also stressed that a priest must be a man of constant meditation.

Being a priest according to Pope Francis, is not a job or fulfilling an employment contract but is a gift from God that should be contemplated and treasured as such. Those who turn ordained ministry into an occupation “lose the heart of the ministry, lose the gaze of Jesus who looked upon all of us and told us, ‘Follow me,’” he said this on September 19, 2019, during morning Mass at the Domus Sanctae Marthae in Rome.

The Pope focused this homily on the day’s first reading in which St. Paul writes to Timothy (1 Tim 4:12-16), “Do not neglect the gift you have.” Ordination is a freely given gift from the Lord, the Pope said; it is not “a job” or “an employment contract” in which one “must do” something. “Doing is secondary,” he said. First and foremost, “I must receive this gift and safeguard it as a gift and from that — in the contemplation of the gift — everything else springs.”

When ordained ministry is not seen and treasured as a gift, he said, “deviations” emerge, starting with “the worst ones, which are terrible, to the more everyday ones that makes us base our ministry on ourselves and not on the gratitude of gift and love for he who gave us this gift, the gift of ministry.”

Dear new priests, let me share with you from my personal experience.
When asked to go to Rome for further studies, some of my fellow priests encouraged me to change the course my Bishop had asked me to do and do a course they claimed I was more suitable for. I stuck to the choice of my Bishop. When my Bishop asked me to return at the end of my studies in Rome, some Nigerian priests asked me why I should rush home when I could go to America to make some money! On arrival in Yola, my Bishop gave me a ramshackle Peugeot 404 pick-up car for my work. I believe he wanted to see if my reaction would be positive or negative. When he saw that I enthusiastically collected the keys and I was about to enter the car, he quickly told me that he had another car for me – in fact, he gave me the 504 Peugeot car he was using before he bought a new one!

In my first year as a priest I was transferred five times, made an assistant parish priest after being parish priest! It was difficult but I loved it, especially working in rural areas, climbing mountains, serving the simple people of God, etc.

My father’s advice helped me a lot too. He said, “I sent you to school, not to the priesthood, you chose that yourself. Do not spoil ‘their thing’ for them”. These words kept ringing in my ears. He would counsel me, “Greet the chiefs wherever you are posted, do not drive in the night, avoid ‘anything’ to do with people’s wives”. When I gave him some kola nuts I bought on my way from Onitsha, returning from a YCS meeting as chaplain, he asked how I got the money since he understood that priests didn’t have a salary? His words of advice complemented what the seminary taught me!

Our temptation today is to equate the priesthood with one of those good jobs, a position of influence, a career with great promotion prospects, etc. Today, some politicians expect priests to campaign for them from the pulpit; people expect priests to intervene with government officials in matters of contracts, appointments, promotion and even to tamper with pending court cases. I have heard people complain that priests who are their friends or relatives have been posted to a bad place (i.e. not lucrative) or priests who return from abroad after studies, some persons (including priests) wonder why after staying in “oyinbo” land they will be punished by being sent to a so-called low appointment!

The question is, “Whose son, friend or brother do you want to go to the village or take up an apostolate that you think is not financially rewarding The spirit of the early expatriate missionaries which is vanishing must be rekindled. The early missionaries, away from home and operating in a foreign culture were prepared to go to the poorest villages, trekking on foot, riding horses, donkeys, bicycles and if lucky, driving very humble but functional vehicles.

Pope Francis declared the Missionary Extraordinary Month in October to call priests to a renewed sense and way of mission and the lay people to feel co-responsible with the priests in spreading the gospel.

Pray please for us priests to be solid and firm in our vocation, Christ-like in disposition, always by our words and deeds inviting people to Jesus and being holy as the Lord is holy (cf. Lev. 19:2).

As today we celebrate the feast of the Lateran Basilica built by the Emperor Constantine in Rome in about 324, we join the rest of the world in honouring the basilica regarded as, “the mother and head of all the Churches of the City and the World”. Let us continue to express our unity and love towards the See of Peter- attentive and faithful to the teachings and pastoral guidance of Pope Francis.

We earnestly hope that our new Divine Mercy project through your untiring sacrifices and support will be brought to completion by the grace of God. I thank you from the bottom of my heart for all you have done so far. I dream that one day when this project is completed and is in use, Rome will grant us the favour of making it a basilica.

The Servant of God, Gabriel Gonsum Ganaka will intercede for this noble intention.

Finally, we congratulate our new priests and wish them a happy and fruitful priestly life and ministry. Let us support them to be truly selfless in service and down to earth, close to the people and positively touching their lives.

Thank you Jesus for giving us these priests today. Amen 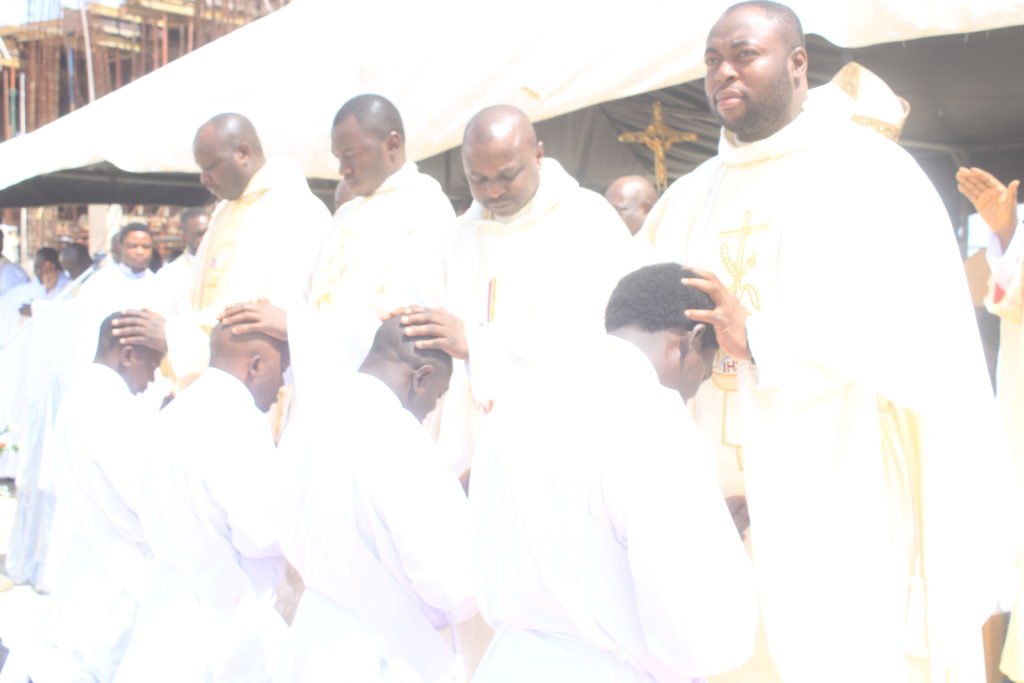 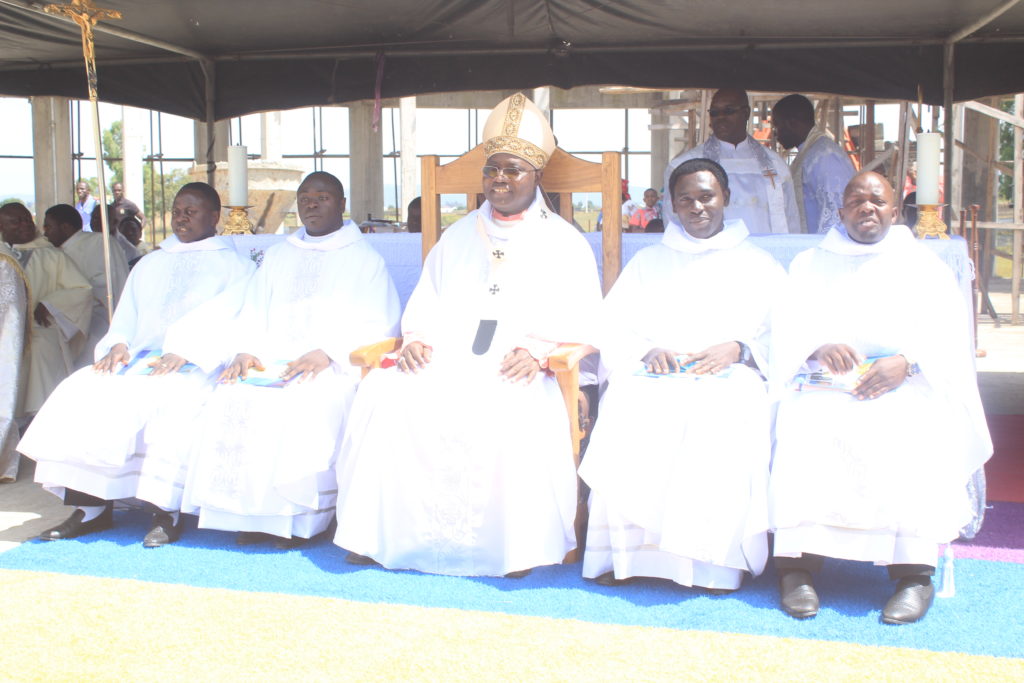 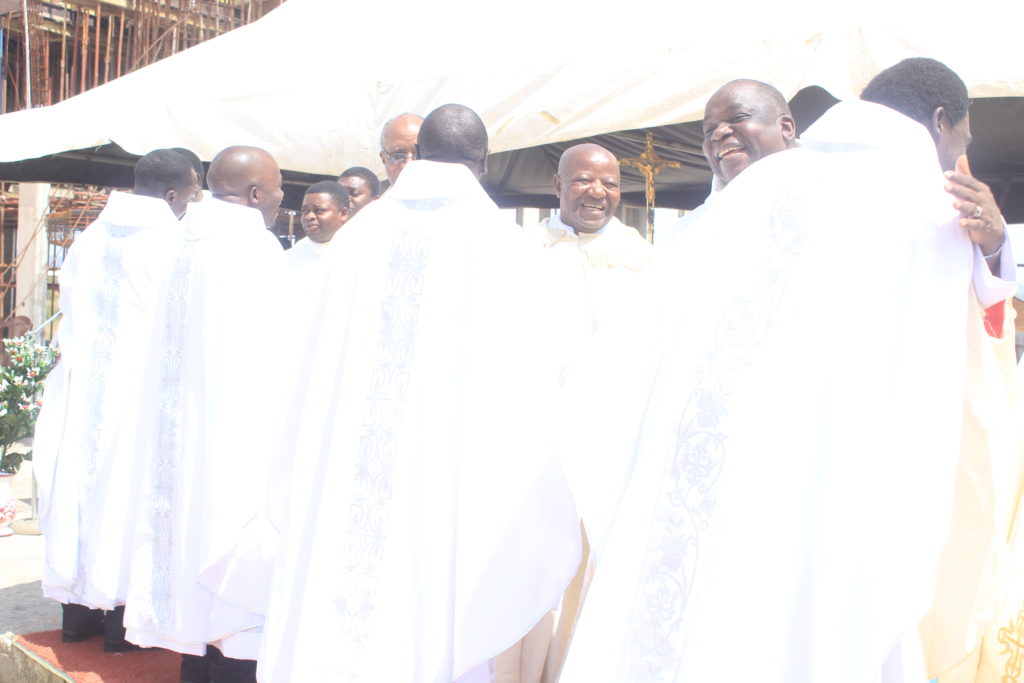