Live Out the Ministry of Peace, Love and Mercy

I feel so happy and impressed to see one of our new pastoral areas hosting on this Sunday of Divine Mercy, the diaconate ordination of Emmanuel O. Okonkwo, Humphrey O. Ayegba, Michael-Maria C. Nzume and Peter A. Agbo. I have permitted the fifth candidate of this set, Joseph Dankyang, to be ordained as a deacon on May 8 in Rome where he is presently studying.

In August 2020, we created thirty new pastoral areas and many of them had no land, parish house or church building. I am however very happy with the progress recorded so far. Here, in St. Donatus Saukale, Fr. Istifanus Sheyin, and his people are demonstrating eloquently that prayer and hard work, lived in a spirit of unity and peaceful coexistence result in substantial progress. Where there is a will, there is certainly a way for communities which struggle to do things by themselves and for themselves, even despite the challenging economic conditions. The willingness to share the little we have, with each person serving selflessly, is what makes progress possible and lasting as demonstrated in Acts of the Apostles, where among the community of believers “no one claimed any of his possessions as his own” (v. 32), rather, they “distributed to each according to his need” (v. 35). They were one in heart and mind, and the common good was above all else. Nigerians must learn to put the common good first, not tribal, religious or political sentiments.

In Acts 6, seven helpers (deacons) were selected to serve the community. We note how the evolving community of the early believers embraced dialogue and democratic procedure as the most effective way to end tension of an ethnic nature. The increasing number of believers made it difficult to distribute goods effectively, resulting in some being neglected. The Apostles did not allow themselves to be distracted by mere administrative work, while the work to spread the Gospel was jeopardized. Not ready to allow ethnic marginalization, the Apostles resorted to selecting seven men based on merit, not through the manipulation of god fathers or some selfish ethnic considerations. The only criteria were that the helpers should be full of the Holy Spirit, wisdom and selflessness.

Sensitive to the ethnic composition, the Aramaic-speaking Jews were prepared to let the minority Greek-speaking Jews to control the distribution of goods so that the Apostles could free themselves for their work of preaching and praying.

Our deacons being ordained today could be said to be the precursors of today’s civil servants who are expected to render whole-heartedly service. Not a few Nigerians however agree that many civil servants like other categories of leaders are generally neither civil nor servants. Often, they are self-serving rather than serving the interests of those who depend on their services. The qualities expected of servants like good reputation, trust, ability to manage public resources well, the wisdom to carry out an equitable distribution of resources are grossly deficient among most of our leaders, whether political, traditional, security, etc. One finds regrettably, some religious leaders who have metamorphosed from being servants, prayer specialists and preachers to business or commercial strategists.

In our country, the syndrome of “what is in it for me” is what has caused our greatest drawback. Leaders, rather than ask what they can do for people entrusted to their care, demand what the poor can do for them or how they can unjustly take from what is for the poor to foster their happiness, while the poor sink into deeper poverty and misery.

Whether it is the distribution of COVID-19 palliatives, IDP relief materials, food ration for prisoners or school children, the execution of constituency projects or contracts to improve infrastructure, what concerns the majority of public officials is self rather than the common people. The calmness and selflessness of the early leaders who promoted unity and loving coexistence is in very short supply today.

Today, being Divine Mercy Sunday, we celebrate the fact that God’s mercy to us is unending without which we are lost and hopeless. We read from Lamentations that, “the steadfast love of the Lord never ceases, His mercies never come to an end; they are new every morning” (3:22-23).

By instituting Divine Mercy Sunday, Pope John Paul II realigned himself and the whole Church to the message of love and mercy given to the world by Jesus through Sr. Maria Faustina. It was Divine Mercy that moved Jesus to die for us (cf. Rm. 5:8). All we are, and have, are by God’s mercy and so we must perform loving deeds and show mercy to others and not to be like that ungrateful servant in Matthew 18 who, having enjoyed an incredible debt cancellation from his master could be so unforgiving to his fellow servant of a small amount.

The bestowal of the Holy Spirit on the Apostles to forgive our sins by Jesus in John 20:22-23 is a further demonstration of God’s mercy which we experience in sacramental confession in the Catholic Church.

The second reading from St. John’s first letter focuses on the need to obey God’s commandments to love and to become channels of God’s mercy and peace; to penetrate the walls we have built around us which hinder us from genuine love and service. The violent attacks on innocent people, the criminal and sinful act of kidnapping being turned into a lucrative business, the excessive bloodshed all around us are becoming too embarrassingly painful.

To our brothers being ordained deacons, I urge you to live out your ministry as deacons, preaching peace and love with due diligence and reverence. You must teach sound doctrines handed down by the Apostles and resolve to proclaim the Gospel of the risen Lord with firm conviction. You are called to be of service to the poor and marginalized in our society without ethnic or religious discrimination especially in these difficult times. I enjoin you to refrain from bearing false witness; never yield to the temptation of marketing a gospel of materialism. As transitional deacons, you hope to be ordained priests soon. Yours is not a ministry of convenience, not of choice places, but one that embraces all people, to go wherever you are sent to preach peace and the love of God. Anchor your faith in Jesus and like Thomas, say, “my Lord and my God” (Jn. 20:28).

I congratulate you for offering yourselves to the service of God and His Church. For us all, let us show mercy towards our neighbors always and everywhere, until we grow to see in each other brothers, sisters and compatriots (cf. Diary of Sr. Faustina, 742). 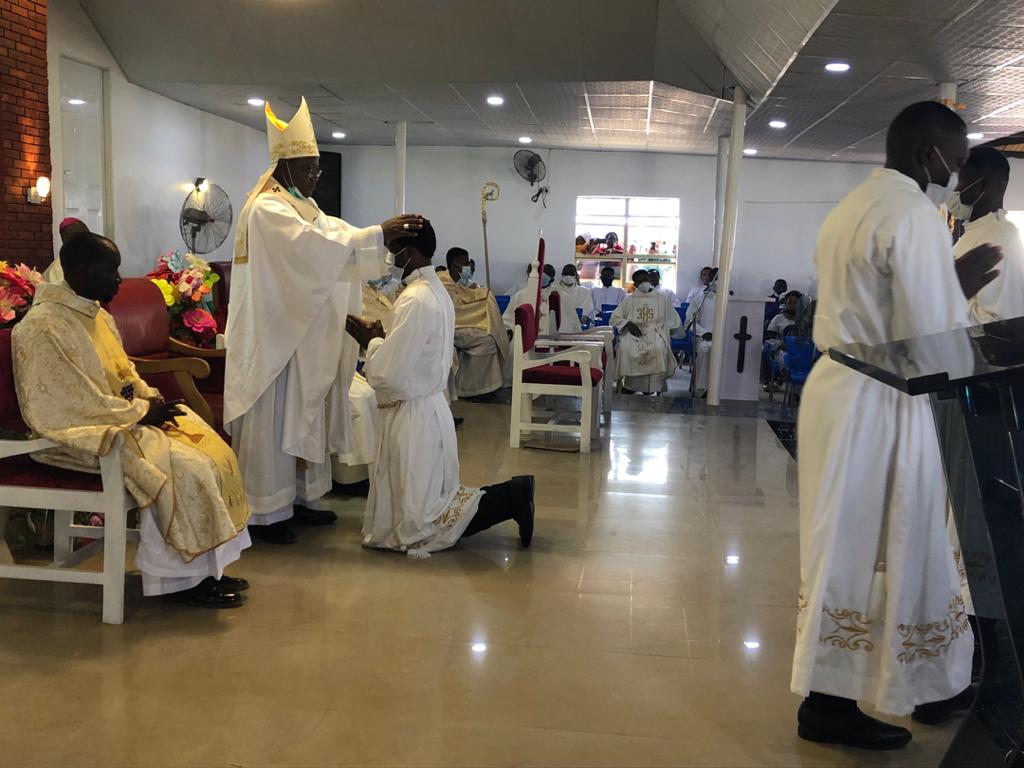 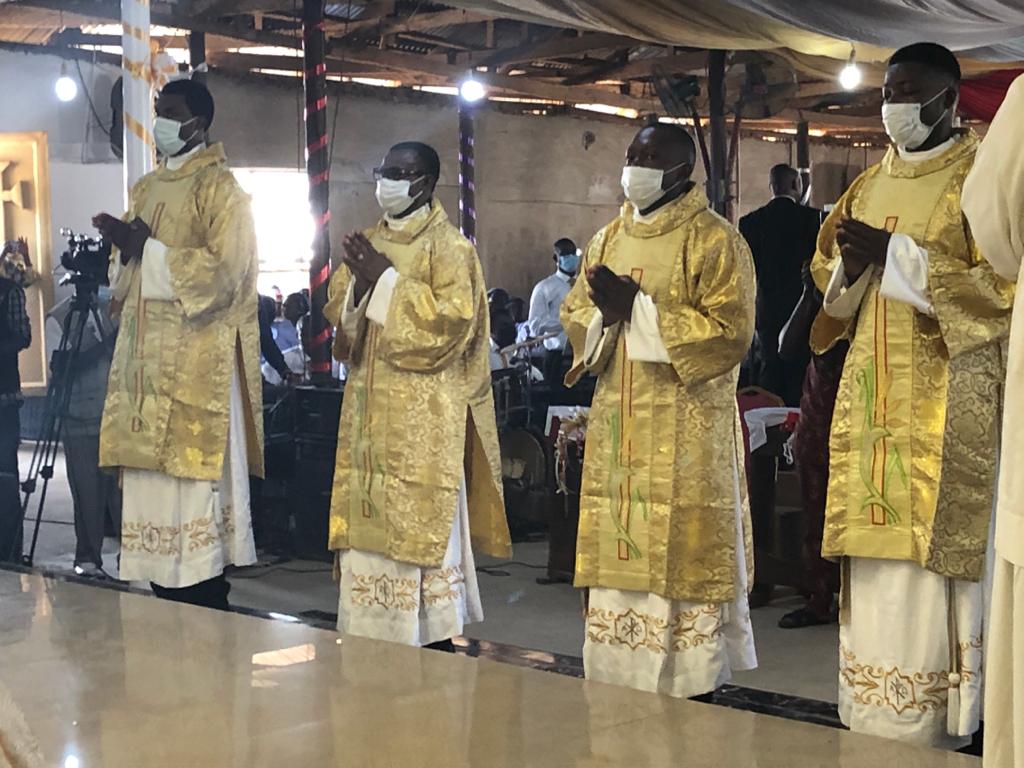 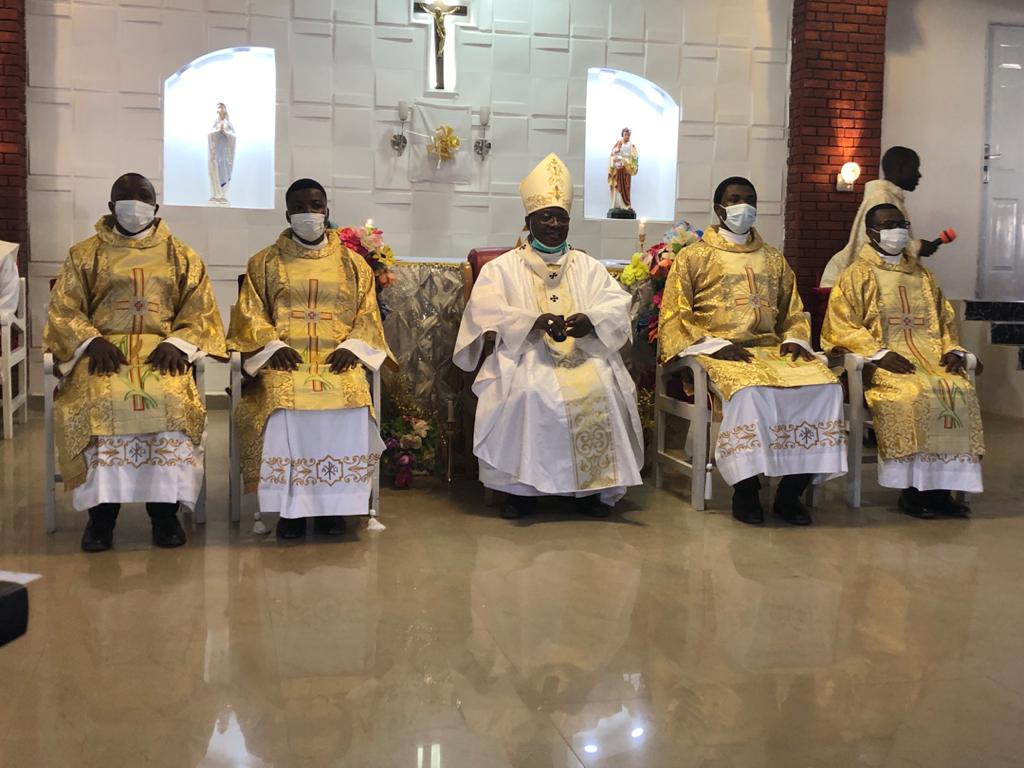 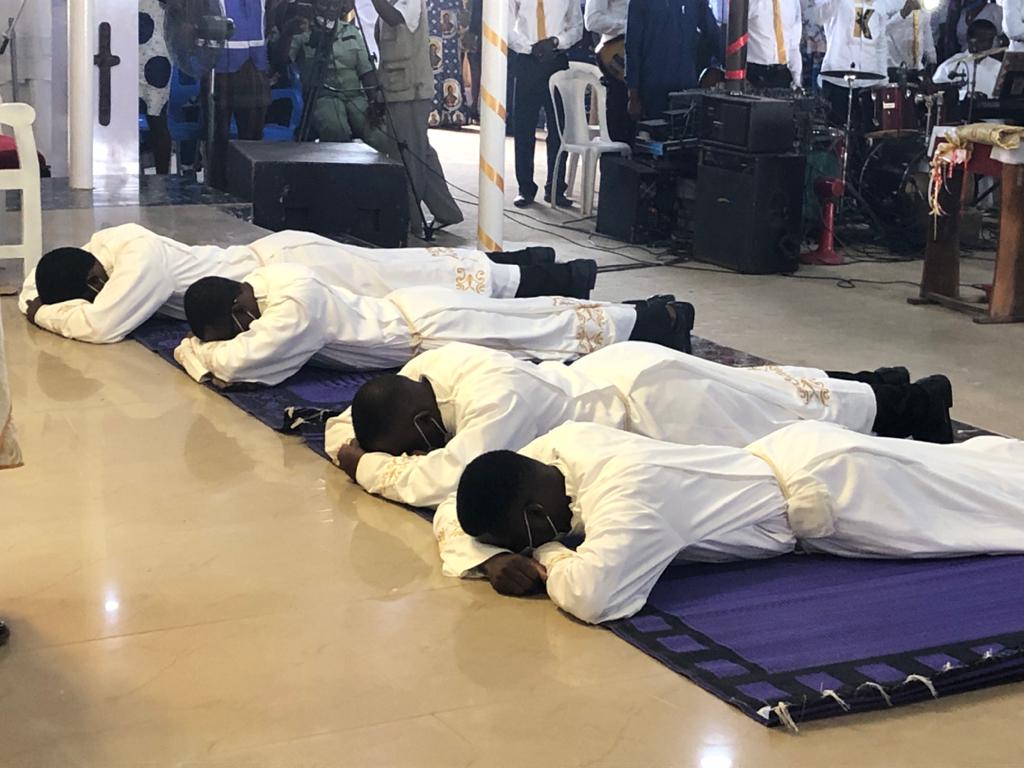 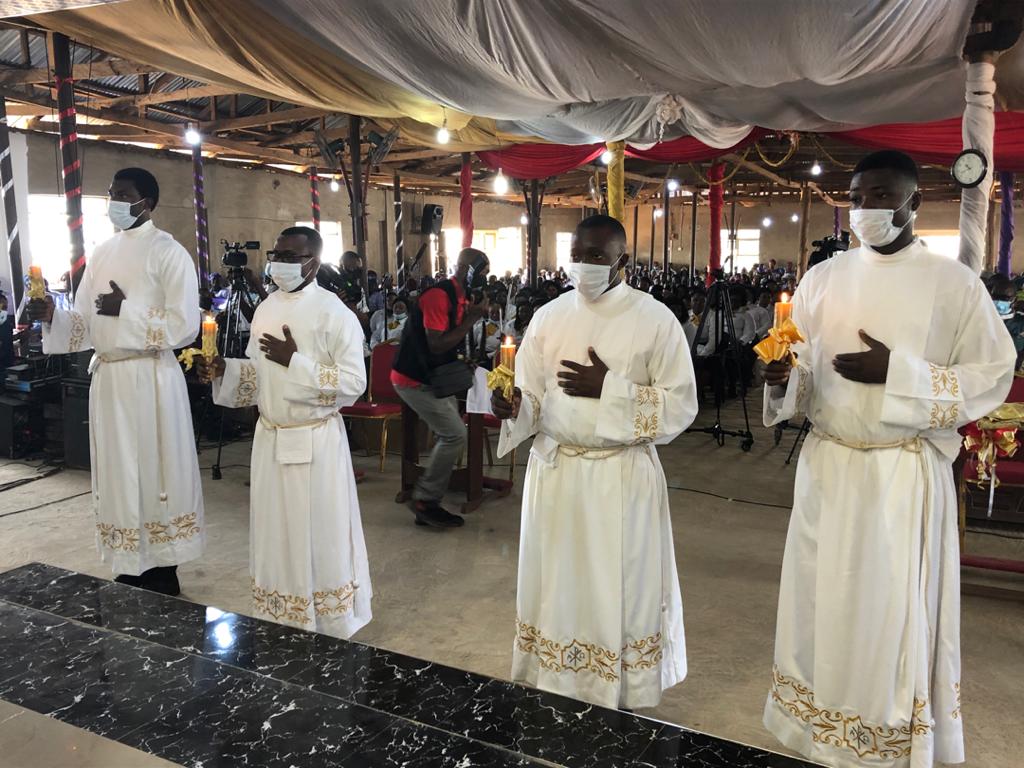 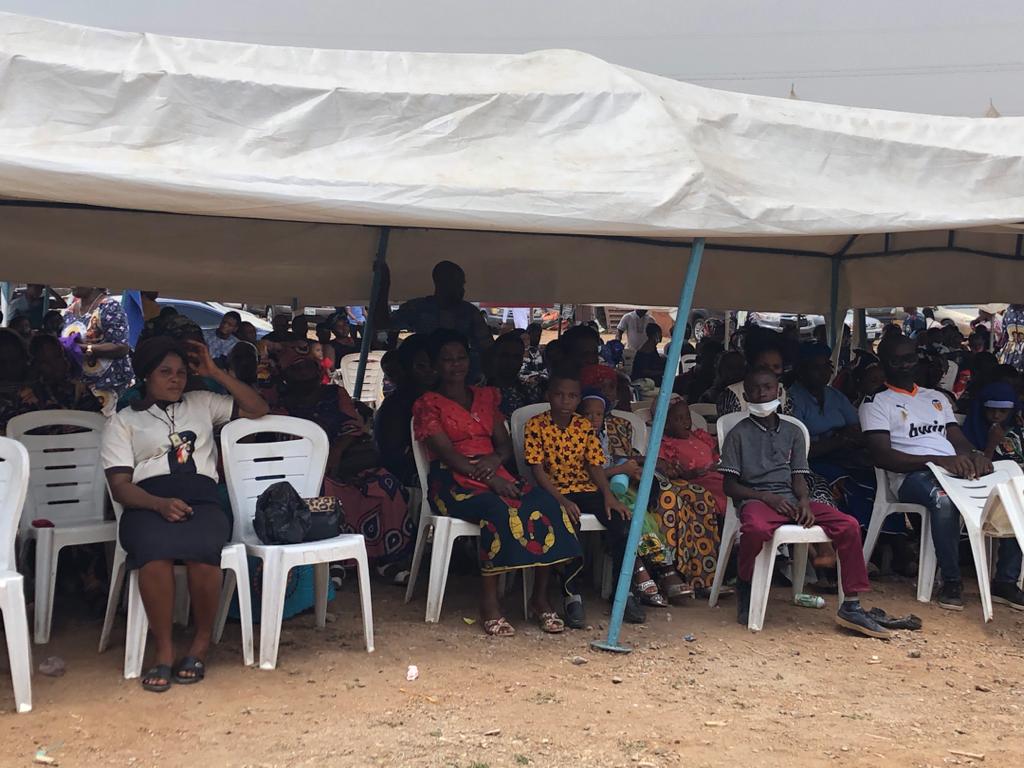 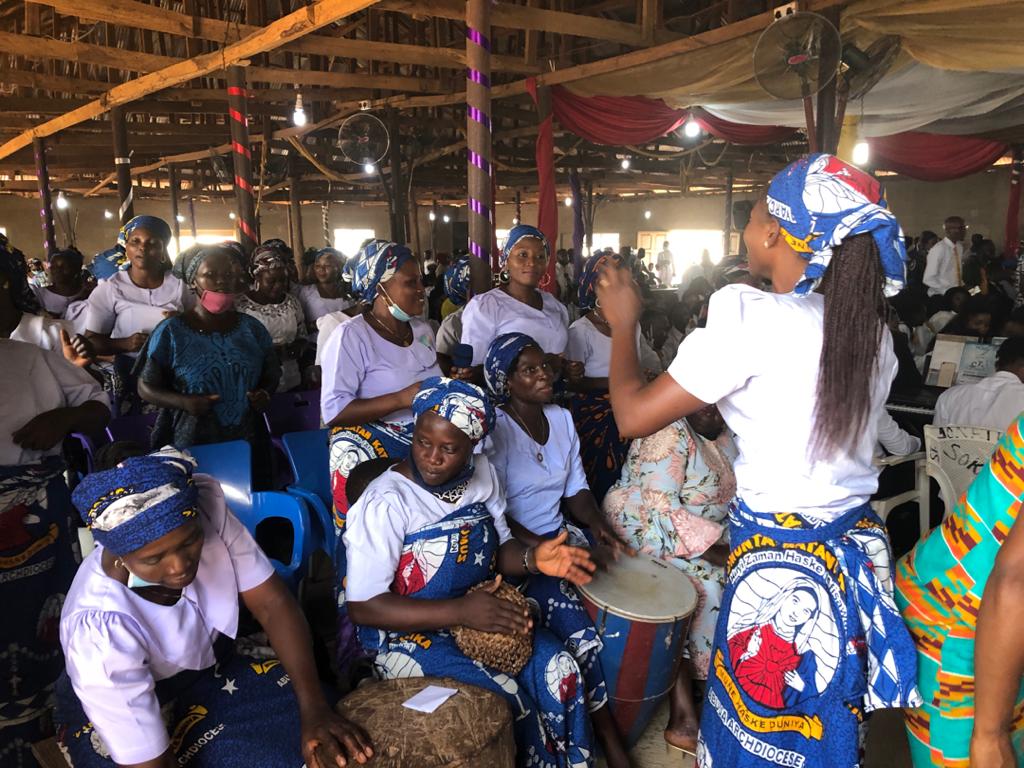