INTERNATIONAL RELIGIOUS FREEDOM: A New Era for Advocacy in Response to a New Age Of Challenges and Threats 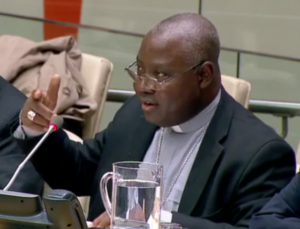 During my flight from Abuja to Paris before connecting here to New York, I briefly met a priest of Maiduguri diocese, Nigeria, who told me that he was returning from the funeral of his father who was killed recently in Nigeria by the fanatical Islamic group, Boko Haram. This incident and thousands of other such cases are an
indication of how the practice of religion for some people can become exaggerated and wild and do a lot of harm; yet, if religion is well practised, it builds, binds and transforms persons and peoples for good. 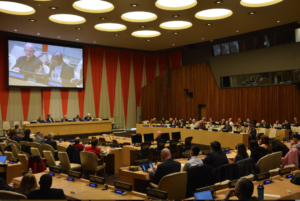 We must note that all people are capable of extreme religious views and practices. We must likewise avoid hasty generalization that, for example, because Boko Haram soldiers are Muslim, therefore all Muslims are guilty of Boko Haram’s crimes.  In Nigeria, in particular, there is such a hypersensitivity about religion that a little argument can result in a spark that may lead to a great conflagration. 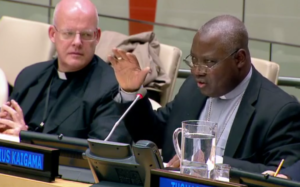 Thousands of people in Nigeria have been maimed, displaced, dehumanized and killed. Religious adherents have been pitched against one another and plunged sometimes into bitter rivalry, hostility and violence in the name of religion. This contradicts what
true religion stands for and gives the wrong impression that religion is a force for evil. For most Nigerians, religion is a blessing and a liberating force.

THE CASE OF BOKO HARAM

Boko Haram was founded in 2002 and became a militant group especially after the extra judicial murder of their leader, Yusuf Mohammed in 2009. Boko Haram’s desire to reintroduce historic Islamic dominance especially in Northern Nigeria and beyond has led them to commit all sorts of atrocities. At first it was exclusively against Christians, but now it is also against Muslims who do not share Boko Haram’s ideology.

Boko Haram has committed unprecedented crimes. They have killed more than 28,000 people, and have caused more than 3.8 million to be internally displaced (IDPs) and dehumanized many. They became notorious for kidnapping 276 secondary school girls in thevillage of Chibok in Borno State in 2014 and for kidnapping Leah Sharibu along with over 100 of her school mates on February 12, 2018, in the village of Dapchi in Yobe State. All Leah’s schoolmates were later released, but she remains in captivity because she is said to have refused to denounce Christianity to convert to Islam.

Bombings of places of worship with people at prayer are a characteristic of Boko Haram, like the attack on St. Finbarr Catholic Church in my own Archdiocese of Jos, which killed 14 people killed on 11 March 2012.

Boko Haram has territorial ambitions and is evolving into the Islamic State of West Africa Province (ISWAP), manifesting a desire to have their own expanded Islamic country.

The escalation of religious bigotry and hatred in Nigeria are the consequences of Boko Haram’s activities.

But Boko Haram is not the only group committing atrocities against human dignity and religious freedom in Nigeria.

The impact of climatic change on the Sahelian region, a home to many nomads, has made it very difficult to feed their cattle. Drought and deforestation have fueled conflicts with farmers. Eventually such conflicts take on a religious mask, because the herdsmen are generally Muslims and the farmers are mostly Christians.

Permit me to give two examples.

The first happened in April 2018 when two priests and 17 lay people were killed during morning Mass in Benue State. The Mass had just started at 5:30 am when they were gunned down in cold blood. The gunmen then proceeded to raid the barns of those in the
vicinity of the Church and then burn down 60 houses before fleeing from the scene. They were never apprehended. They are just referred to us “unknown gunmen.”

SOME COMPLAINTS BY CHRISTIANS IN NORTHERN NIGERIA

Relations between Muslims and Christians in Southern Nigeria are better. They intermarry, celebrate feasts together and one can convert from Islam to Christianity and vice versa without any threats to one’s life. The relationship between Christians and Muslims is not so amicable in Northern Nigeria.

Fear to speak openly about this must be overcome. Christians and Muslims must be able to speak objectively and dispassionately about negative religious tendencies without one taking offense because it concerns their religious group.

In core northern Nigerian societies with a Muslim majority, to avoid aggression and persecution, Christians say they must keep a low profile and endure whatever comes their way as long as their lives are not in danger. (If Muslims were given the same opportunity to talk here at the United Nations, they would say the same thing about being marginalized in the southern part of Nigeria where Christians are in the majority).

A northern state like Gombe has a significant Christian minority that is growing in both population and influence but they fear that the Muslim majority is becoming jittery and is adopting measures aimed at checking the growth of the Christian minority as well as stopping them from occupying key positions in politics and in the civil service. In states like Gombe and Bauchi, Christians are tolerated but all it takes is a false accusation for them to be violently attacked.

The case of the murder of Christiana Oluwatoyin Olusase in 2007 readily comes to mind. Mrs. Olusase was a Christian High School teacher who was supervising an examination on Islamic Religious Knowledge. According to the practice in Nigerian schools, students taking exams are required to keep their school bags away from their seats. Some of the students, however, did not do that. So Mrs. Olusase collected their bags and kept them together in a separate place. It was then that one of the students starting shouting that her Quran was in her school bag and that Mrs. Olusase, who was a Christian, had desecrated the Quran by touching the bag. Commotion ensued in the classroom and the students pounced on
Mrs. Olusase, beat her and clubbed her to death. As if that was not enough, they then dragged her corpse out of the classroom and burned it in front of the school building. Nothing was done to the murderers after these brutal attacks to serve as a deterrent to future attacks.

Christians are very concerned that the following measures are also aimed at checking the growth and spread of Christianity in the north:

It is no surprise that more than any other region in Nigeria, Northern Nigeria has become the hotbed of religious extremism and fundamentalism. 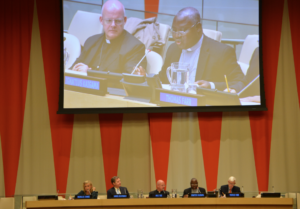 ATTENTION OF THE
INTERNATIONAL COMMUNITY NEEDED

The international community has the responsibility to assist countries to stop the killing of fellow human beings in the name of religion. The blood of innocent victims is likely to turn into a sea if extremists are left unchecked.

I could humbly make a few suggestions.

There is need for assistance with modern equipment to fight crime if the Nigerian government is to strategically be ahead of the extremists and kidnappers.

The UN should continue to insist and demand of her Members States to respect the fact that no one religion should believe it can be a single dominant world religion.

Through education we can step up the capacity of citizens to transcend narrow religious prejudices and indoctrination to shape a better future through understanding, dialogue, reconciliation and peace building. We must invest in Interreligious dialogue, such as I have tried to do in the Dialogue Reconciliation and Peace Centre (DREP) that I founded in Jos.

The international community must see to it that States with a religious majority should adopt transparent measures that guarantee freedom of religion for all, so that the majority does not cripple the growth of the minority by stopping them from occupying key positions in government or business.

The U.N. could suggest to all its Members to have ministers of religious freedom.

Finally, the mass media and social communications media must avoid sensationalism, pitching one religious group against another. Often what is purely a social, political or economic confrontation is reported as a religious one, simply because those involved are Christians and Muslims. That only serves to pour gasoline on the fire.

The newly declared re-elected President of Nigeria must do more to help detoxify the mind of youths poisoned by religious prejudices and indoctrination so that they can engage others as fellow human beings with respect. What goes for him goes for all leaders.

More than any other factor, religious extremism can cause the polarization and even the disintegration of Nigeria and that will be catastrophic for the entire Africa. More concrete help is needed to curb the excesses of extremists, criminals and corrupt leaders.

And that’s the work that all of us are called to do together.

Thank you very much for your kind attention